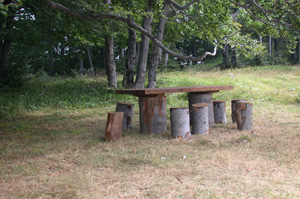 25 km to the south-west of Gbrovo, amidst unique natural scenery and spectacular relief, lies the largest glade in the Balkan Mountains – the Uzana Glade. The geographical centre of Bulgaria is right here, and it is signposted. Uzana spreads over a vast area of the mountain at an altitude of 1120m, reaching to an altitude of 1400m in some places. It is characterized by a clearly expressed mountainous relief, by long and steep slopes and high ridges, facilitating the development of winter sports. 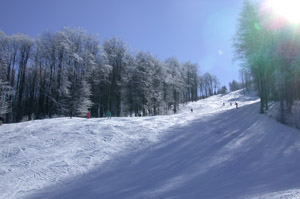 The availability of ski-lifts of different levels of difficulty, places to rent skiing equipment, as well as the variety of hotels, recreational homes and mountain lodges, make the area a favourite winter resort.
There are also plenty of opportunities for sightseeing and alternative tourism in the summer. Several eco-paths have been built in the region. The rich biodiversity of rare and protected species attract environmentalists and lovers of nature from far and wide. 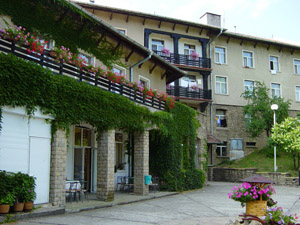 The Lilacs is a beautiful area in the mountains, 16 km away from Gabrovo, at an altitude of 840 m. The high ozone content and the chemical composition of the air are favorable for the treatment of diseases of the lungs and the respiratory tract, allergies, hypertonia, arteriosclerosis in the initial stage, endocrine and metabolic disorders, and neurological conditions. A three-star hotel is waiting for its guests here, offering contemporary spa facilities. 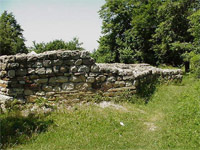 If you go a mere 3 km away from Gabrovo, along a picturesque winding road, you get to the Gradishte area. Here, in the heart of the fresh and cool pinewoods, there is a vast glade with a children’s playground and a picnic area. On your way to Gradishte, you can visit the Zoo and the Planetarium. Above the glade, following a path through the forest, you get to the high rock plateau where there are ruins of a castle dating back to the 4th – 5th century, guarding the road through the Shipka pass. There is a fortified wall with turrets encompassing the area. An impressive basilica once stood on top of the highest point of the plateau. From there, now you can enjoy the breath-taking panoramic view of Gabrovo. 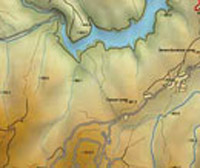 The natural park occupies the north slope of the Central Balkan Range. It was declared Natural Park /a natural reserve/ in 2002 so that the beech eco systems, typical of the Balkan Mountains, the flora and fauna, and the rich cultural and historical heritage, could be preserved and maintained. The park has an area of 21 772 hectares and includes territories of Gabrovo and Tryavna Municipalities. The average altitude is 940 m. The national park-museum ‘Shipka-Buzludzha’, the ethnographic town-museum ‘Etara’, the protected territories of Sokolski Monastery, ‘Mahchenitsa-Yovovtsi’, ‘Studen kladenets’, ‘Stolishta’, and the natural phenomena the Mossy Rocks and the ‘Called-for Rock’, the natural yew deposit and the Big Beech, fall within the boundaries of the Natural Park. About 80% of the territory of the Natural Park is forest.

There are over 1300 plant species in the Park, 32 of which are listed in the Red Book /of protected species/ of Bulgaria. 70% of the Bulgarian medicinal plants can be found here. There is rich variety of wildlife, too: rock eagles, small hawks, woodcocks, bears, otters, wolves, wild bores, red deer, does, etc. The beautiful nature, the varied relief, the rich biodiversity and the cultural-historical heritage, provide preconditions for the development of specialized tourism.

THE ASTRONOMICAL OBSERVATORY AND THE PLANETARIUM

It is designed to provide knowledge in astronomy and to promote the achievements of astronautics in the cultural and educational sphere of ‘Natural Sciences and Ecology’.
In the constellation hall, equipped with 80 seats, by means of the ‘Planetarium’ Projector, recreating the appearance of the starry sky and the movement of the celestial bodies, educational, popular-science and children’s programmes are presented not only in Bulgarian but also in English, German and Russian.
From the astronomical observatory, in clear weather, you can observe through a telescope the Sun, the Moon, planets, nebulas, constellations, etc.
In the foyer, there are interesting photographs, paintings, maps and other materials on the subject of astronomy and space.