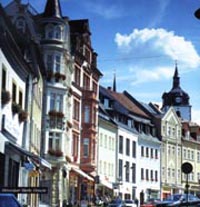 The 13th degree of longitude and the 51st degree of latitude cross in Mittweida. The town is situated in the Free State of Saxony, between 214 and 342 m above sea-level in the valley of the Zschopau River. Mittweida is a verdant city with a population of about 17 300 people.

In the 16th century the town marked a boom in trade, textile industry and beer production.

Its present image, to a considerable extent, is defined by the Technical School of higher education which combines both tradition and innovations in favour of the prosperity of the town and the young people who are educated in more than 40 subjects.

On the basis of the resolutions carried by the town councils of Gabrovo, on March 16th 2000, and of Mittweida on October 28th 1999, the two towns came to an agreement for future cooperation. Their mutual work, to a great extent, was to gain impetus and to be complemented by the partnership activities, negotiated between the University of Gabrovo and the Higher School of Mittweida in 1972. The purpose of the new partnership was to bring the citizens closer to the European idea of unity, to intensify the feeling of common affiliation, to stimulate the mutual understanding and to create unifying relations.