Chernihiv is situated in the northern part of Ukraine and it is the second largest regional centre in the country. The city is located along the picturesque bank of the navigable Desna River. The population runs to 293 800 people.

The first written information dates as far back as 907 but according to some historians the history of the settlement originates as far as the 7th century. During the period of Kiev Russia, the city actively competed in the fight for domination along with the capital Kiev.

Nowadays, in the historical and cultural heart of Chernihiv there are a number of monuments which are a part of the ancient fortress more famous as Chernihivski Bank, where 12 cannons are situated. Today, on this place a number of outdoor activities attract many visitors. As a piece of banter when someone wants to deceive someone else people say: ‘Wait for me by the 13th cannon.’ 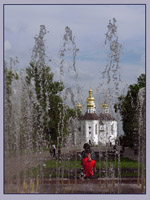 There are lots of churches on the territory of the town such as Spaso- Preobrazhenska Cathedral (Transfiguration Cathedral), Antonievi Caves, Chernihivski Collegium, Catherine’s Church and Troitsko- Ilievski Monastery.

The cooperation agreement was signed in September 2007.